Women’s Spaces Radio Show with host Elaine B. Holtz  Commenting on Memorial Day with her Poetry and Songs of Women has been uploaded to the web archive.  The show was recorded, broadcast in the North Bay and streamed worldwide over Radio KBBF 89.1 FM  on Monday 5/25/2020 at 11 AM (repeats at 11 PM on KBBF) and repeat broadcast in Petaluma and streamed worldwide over Radio KPCA 103.3 FM on Wednesday 5/27/2020 at 11 AM.

Listen to the show on its archive page at:

1. Elaine B. Holtz, Host and Co-Producer, Women’s Spaces, presents her Commentary and Poetry for Memorial Day

1.  Elaine B. Holtz, Host of Women’s Spaces, presents a commentary on Memorial Day spiced with her poetry and songs by women singers.  She reflects on the origins of Memorial Day that began with Abraham Lincoln setting aside a day to remember the fallen soldiers on both sides of the Civil War and of Mother’s Day that began with women cleaning the Civil War battlefields of amputated arms and legs which inspired Julia Ward Howe to make her Mother’s Day Proclamation.  Elaine reads two of her poems, Stopping the Next War and Why What Does All This Mean:

For more of Elaine’s poetry visit the web page Poetry: I Am Woman

A larger Compilation is at the National Women’s History Alliance

May 29, 1977 – Janet Guthrie becomes the first woman to qualify for and complete the Indy 500 car race

May 29, 1943 – “Rosie the Riveter” by Norman Rockwell appears on the cover of the Saturday Evening Post

Her Birthdays This Week

May 27, 1907 (1964) – Rachel Carson, scientist and environmentalist, wrote Silent Spring which became a cornerstone of the modern environmental protection movement

May 31, 1928 – Sonia Pressman Fuentes, NOW co-founder, first woman attorney in the Office of the General Counsel at the EEOC

Check links in case of postponement, cancellations, or restrictions due to pandemic precautions.

August 26 – November 8, 2020, Petaluma’s Participation in the Women’s Suffrage Movement, Petaluma Library and Historical Museum The Petaluma Museum Association’s suffrage exhibit has been rescheduled. This postponement has provided the opportunity to coordinate the exhibit’s opening reception with the national celebration of “Women’s Equality Day”. Mark your calendars for Wednesday, August 26th, 5 to 8 pm! The exhibit will be dedicated to our former Congresswoman, Lynn Woolsey, and our former Mayor, Helen Putnam, and we are delighted to report that Mayor Barrett will be attending the opening to bestow the honors.
https://www.petalumamuseum.com/2020/04/18/petalumas-participation-in-the-womens-suffrage-movement/

January 25 through September 13, 2020,  From Suffrage to #MeToo at Museum of Sonoma County.  Please note: Fee is required for entry to museum. For more information visit https://museumsc.org/suffrage-metoo/

League of Women Voters of Sonoma County has scheduled candidate debates and ballot measure discussions. See their webpage listing the events at https://www.facebook.com/lwvsonomacounty/

Travelin Soldier sung by Dixie Chicks from the album Top of the World Tour Live (2003 Columbia Records, A Division of Sony Music Entertainment)

Women’s Space Radio Show with host Elaine B. Holtz and guest Shekeyna Black on the 2019 Peacemaker Awards and segment guest host Leslie Graves Interviewing Elaine on Finding Her Voice. has been uploaded to the web archive. The show was recorded, broadcast in the North Bay and streamed worldwide over Radio KBBF 89.1 FM  on Monday 11/4/19 at 11 AM (repeats at 11 PM on KBBF) and repeat broadcast in Petaluma and streamed worldwide over Radio KPCA 103.3 FM on Wednesday 1/4/19 at 11 AM.

Listen to the show at:

Finding Her Voice – The Interview of our regular host Elaine B. Holtz

1.  Shekyna Black talks of the work of the Peace and Justice Center in Santa Rolsa and announces their Peacemaker Awards and Fundrasiser at the Old Redwood Cafe in Cotati on Saturday, November 9th.

About our Guest: Shekyna Black has been the Center Coordinator of the Peace & Justice Center of Sonoma County for 4 years. She grew up in Los Angeles County and moved to Sonoma County in 1986 to attend Sonoma State University where she earned a degree in Theatre Arts. She went on later to earn another Bachelors in Organizational Management and a Masters in Entertainment Business. She is passionate about music as a way to connect people from diverse backgrounds. Additionally, she has her own business called A Miracle Production that produces bands, concerts, festivals and events. She does bookings and publicity for shows at Redwood Cafe in Cotati. She is the Director of Entertainment for the publication, Upbeat Times. She is a mother to four adult kids.

2.  Leslie Graves.is our guest host in this segment. Leslie interviews the regular host of Women’s Spaces, Elaine B. Holtz. Leslie helps us discover when and how Elaine began to question the war policies of the USA and find her voice to express her concerns in spite of being raised with fervent patriotism by her immigrant father and first generation American mother .

About our Regular Host: Elaine B. Holtz is a longtime activist and producer of Women’s Spaces on Public Access TV Santa Rosa, She is also President of the National Organization for Women, SC Chapter and writes the column, Santa Rosa SNippetts for the So County Gazette. She holds an AA degree in Journalism/Public Relations from Los Angeles City College. Her BA is from Sonoma State University in Sociology and her Masters degree from San Francisco State University is in Education. She believes women need to involved in the peace process and promote and support the idea that all women and children in are entitled to an environment that supports life and is safe and free of war and hunger.

About our Guest Host:  Leslie Graves is a member of the Sonoma County 2020 Women’s Suffrage Project steering committee. This is a year-long project to celebrate the centennial of the 19th amendment and create programs which explore the complex long history and continuing fight for inclusion of all women. They are a chapter of the California 2020 women’s suffrage project which was created by the national women history alliance which was founded in Sonoma County, in order to support all 58 County California in creating celebration and educational opportunities for the public to engage in this historic moment. 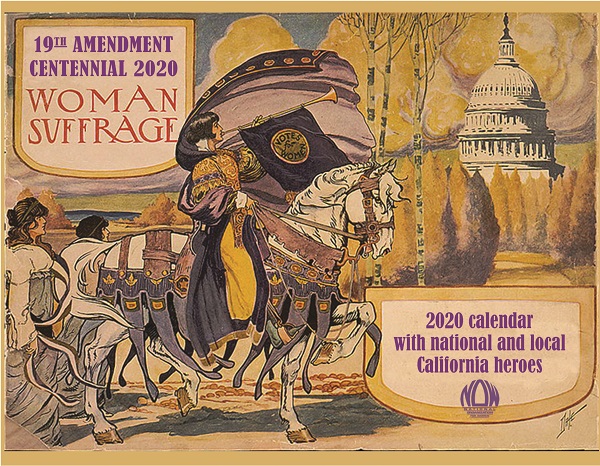